Freshly made from sustainable ingredients in an ethical manner, seeped in olive oil and family tradition… might not be words you immediately associate with your brushes!

And yet, there is a family in Spain, on the outskirts of Barcelona to be precise, who have been making elegant and intelligent brushes (yes, yes that too!) for eighty years exactly. The founder of that little dynasty was a certain Josep Escoda who worked in a metal company. A friend of his asked him if he could improve the ferrules of his brushes as what was available on the market then was all but satisfactory. (We are talking building materials here, but in truth a brush losing its hairs is just as annoying on a white wall than on a white canvas, when varnishing a painting or a table.) The idea that Josep came up with is still used in his factory today. A triple crimping of the metal ferrules so as not to lose any hair, crimps varying in sizes -thin at top and bottom, larger in the middle- achieved by 3 circles of 12 little hammers hitting the handle simultaneously but in alternating sequence so as to not put too much pressure on the handle. Wood is alive and can split, even the best quality Italian birch and beech used to make brushes at Escoda.

Confident of the quality of his product, Josep then left his job and created his decorative and fine art brush company. A good move because, despite the hardships of the Civil War that would soon follow, his small family business is still there. It employs 28 people -including his two sons, granddaughters and grandsons (that’s a lot of kissing when they pass in the corridors!)- and produces nearly a million brushes a year exporting them all the way to the US and Australia.

Josef didn’t stop at that first invention either and most of the machines and processes used today were designed and built by him. Because so many steps are needed to make a brush, little machines had to be invented to simplify or shorten the jobs but the interesting thing I found, when I had the pleasure of visiting the Raphael & Isabey factory a few weeks later, is that they do the same things in a different way. Human ingenuity has taken them down different lanes. Same need, same aim, apparently nearly same results but different journeys.
And indeed it is a long line of obsessive details that go in the making of a good brush. The three ingredients are: the hairs, the ferrule -where the hairs are first introduced then glued then crimped into the last ingredient- the handle.

Escoda does not source locally their hairs and handles. The hairs come from all over the world and I believe their natural hairs are mainly bought during a big fur market that takes place once a year in London. Kolinsky-Tajmyr sable tails from Siberia, from which the most precious brushes are still made, trades there for a higher price than gold (over $6000 a kilo). In the Escoda factory these are kept in a safe, filled with mothballs.
Over the centuries a number of natural hairs have been used by the fine art market however most of them seem to be on their way out. Mongoose hair is becoming illegal worldwide and Squirrel is more and more difficult to obtain. Escoda, like other companies, has had to turn to synthetic hairs and, you know what? I think I like the idea better, knowing what these poor animals had to suffer for a “good cause”. Ricard gave me one of their Ultimo synthetic squirrel mops to try and a Modernista which eventually will totally replace their mongoose line and I must say both were very convincing substitutes.

Handles are made in Italy to Escoda’s design and specifications. Birch wood is used for their sable brushes and beech for all others. Five coats of lacquer are applied to give them their cool looks but of course what makes them truly beautiful is their balanced shape, the purpose determining their length and rotundity.

And now to what is made here in Barcelona. In a sweatshop in China or India, you would call it an assembly line perhaps. Here, when you see the team’s dedication, obvious delight and pride in craftsmanship, it becomes a savoir-faire, some sort of minor but vital artistic achievement reproduced 30 to maximum 50 times an hour… depending on the size of the brush of course and how slippery the hair is. That’s the rhythm achieved after two or three years making brushes which is fine as most have been in the company for decades and the Escoda family planning no move to nowhere… Cheaper employees there or not! I kind of got the idea they like their turf and are pretty proud to be Catalans to boot… the lifestyle doesn’t look too bad either with a little garden, parasols and tables set out for lunch along the side of the fábrica and a lot of consideration given to making everyone’s job station personal, clean and comfortable and, as far as possible, the jobs more interesting too.

For example, my brag of “freshly made brushes” is absolutely true. When they receive an order (let’s say from their distributor in Australia, NEEF) it goes to the workshop and is spread around the workers. This lady will make 12 x triple zero brushes in sable, and that one will make 3 in size 10. Then she will make 12 Perla in size 6 and 12 in size 8 in White Toray (that’s one of the softest synthetic hair) and then again pick up the next order: “if your job is more varied, it remains a bit challenging and you do it better…” 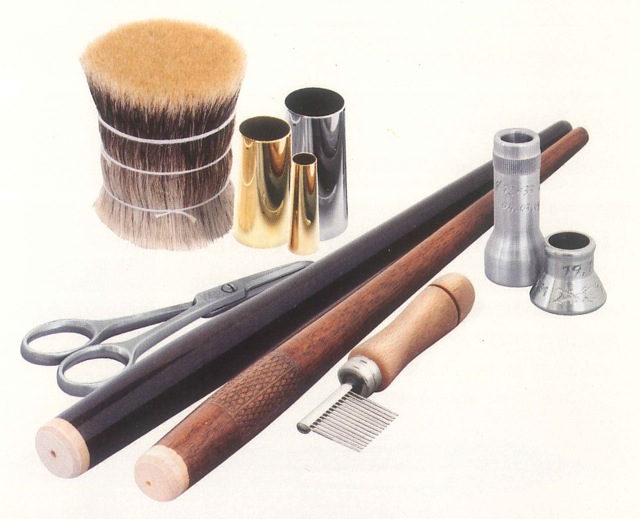 Pinching the right amount of hair for a number 5 brush is done by a clever graded carrousel machine. The hairs are then tied up and introduced into the ferrule manually and both go into a little mould, just the right size and shape for a number 5 round. Another shape will help make a bright or a cat’s tongue. Then tap tap tap to help the hairs slide down gently into place. The whole workshop swings to this soft tap tap. The hairs will go in and out of that shape a few times and extra hairs at the back of the ferrule will be chopped off since only the natural tip has the correct spring to be used. The remaining hairs are totally discarded -even in synthetic brushes. Again and again hairs will be measured, a few pulled out with tweezers to perfect shape, a rebel one eliminated… until the worker is satisfied. Quality takes time.

The tuft, hairs down, is now ready to be glued. The glue can’t be too runny or it will go the other side and spoil the hair, it can’t be too hard or it won’t glue all the hairs in the tuft and, of course, the consistency of the glue needs to vary according to the type of hair. It is then left to dry a whole day. Just enough time for someone else in the factory to get on with labeling their handles.
Because Escoda has no stock, these 12 #5 brushes in that particular line will have to be printed right then with all the details so you can choose them at a glance later. Inked metal plates touch them lightly here. At Raphael they proudly emboss them.

The next day into that clever triple crimping machine they go and become a real brush. They are then checked again and in most companies would be declared finished. But in Spain apparently you then go off for further education: a secret curing process which ensures these beautiful tools will leave the factory with a “memory”. Later, when they meet their fate and carry coloured water or paint, they will remember the lessons learnt during that extra day spent in a mould perfecting their memory skills in an interesting liquid (sorry can’t tell you more, their manufacturing secrets are still… secrets!) The result is not only that they keep their shapes perfectly, but spring back to their desired points -even after the most extreme pressure. Just what we want.

What about the olive oil, you may ask? Well Escoda do make an extra virgin olive oil brush and hand soap but they are not sold in Australia yet. However, here’s the tip. If you have to leave your brushes for awhile (in mothballs for sables) you might find them a bit stiff upon return. Just give them a little massage in a drop of olive oil and, like your tired back, they should be most grateful and feel quite up to the job again!

Perhaps in our world of goods manufactured all over the planet, assembled here, shipped there, painted there, shipped again, labelled there, the idea that one small fábrica still prides itself on doing it all -as much as possible- will appeal to you. But even if this is not so important to you, the end product is a delight to be experienced and a “made in Barcelona” brush should definitely be on your wish list.

PS: Most of the Escoda brushes are available in Australia thanks to NEEF and I seem to have seen them in most art stores I visited in Europe and the States.

PPS: If you would like to know even more about brushes (their hairs, shapes, use, etc.), please go to my Brushes page!

PPPS: yes three generations of Escodas have in truth been at it but I somehow don’t feel too excited about including a generation that’s long gone in a “in bed with… ” post… hope you understand that!

PS: And now you might enjoy reading about my visit to a Japanese brush maker… they are not made anything like here!